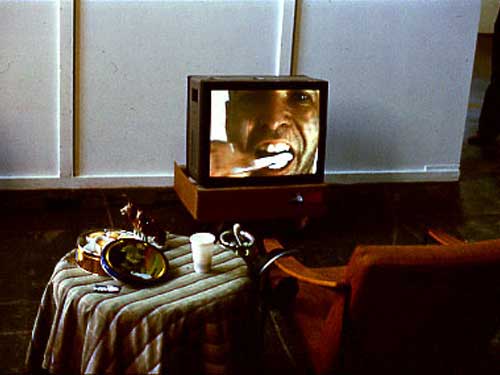 HELLEVISION, the network with a mission.
In Italy Berlusconi were in charge of both the presidency and the media in Italy. And as a real puppeteer he once tried to cast Gerald Schröder for a motion picture. That seems an inspiring idea; bring art into politics!
Hellevision is an alternative to the so-called free press. We don’t claim to tell a truth but visualise issues that we find worthwhile discussing and we do expose fear by exaggeration and by twisting the facts.

HELLEVISION 1st EDITION is based on ideas of conspiracies.
It was online broadcasted and first presented at the ‘Op Schoot’ Filmfestival 2004 in Maastricht. On this event ‘experts’, who were situated on different locations in Europe were on-line with a webcam to participate in discussions with viewers.